Ten protesters were arrested by police, and five of those later died after being released Tens of thousands of Sudanese held a third day of anti-military marches in a turbulent capital on Saturday, and… 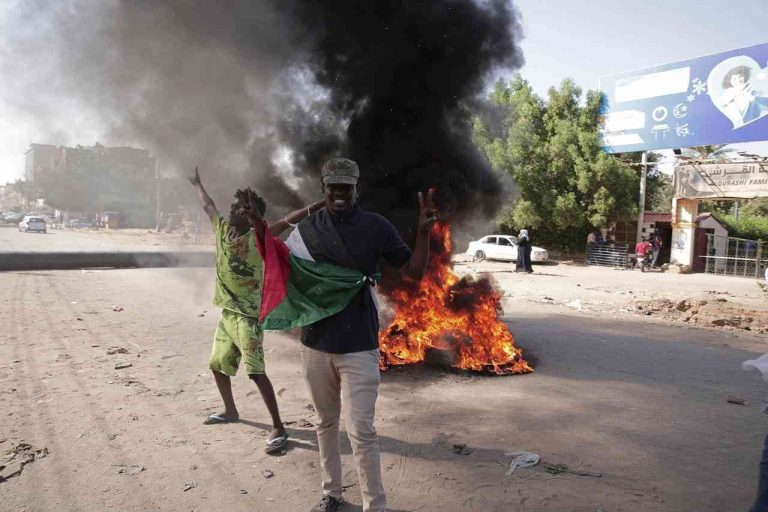 Ten protesters were arrested by police, and five of those later died after being released

Tens of thousands of Sudanese held a third day of anti-military marches in a turbulent capital on Saturday, and after nightfall hundreds began marching through the capital, Khartoum, shouting anti-government slogans.

As the protests began, the police also moved in and began dispersing protesters, arresting 10, said activists, who added that five of those arrested had since died.

“The people are desperate. Bashir is not giving us electricity or gas, while the rich are looting our stores,” said protester Abu Hashem, who did not give his full name. “We cannot sell and buy anything. Those who caused all the problems should be held accountable.”

Similar protests took place across Sudan on Friday, some of them met with deadly force. There were no immediate reports of any casualties.

After dark, huge crowds filled the streets of Khartoum. Within the first hour of darkness, massive crowds began marching along Thikuria and Tayaba streets, which is one of the main thoroughfares of the city. They rallied along Abdalla square. Some protesters chanted slogans against Bashir.

The authorities announced the closure of banks before the demonstrations, and before they took place, however, banks closed their doors in anticipation. Shopkeepers pulled shutters down and were staying open even though commercial transactions had been halted. In the early hours of Saturday morning, traders were dismantling their stock on the main streets.

Street protests against austerity: ‘This is supposed to be my country – I just don’t know what to do’ Read more

Protesters have demanded the resignation of the interior minister, Maj Gen Muhsin al-Majidi, over his claim that the demonstrations are driven by the opposition to Bashir.

“We say: don’t leave. No withdrawal from the people’s demands,” a protester shouted.

Earlier on Saturday, heavy clashes broke out between the protesters and riot police in some of the cities near Khartoum, with demonstrators throwing stones at the police. The protesters had begun a three-day sit-in demanding the ouster of members of the military and other state agencies.

One protester was killed in El Obeid on Friday. In El Obeid, the crowd smashed the windows of a bank, brandished sticks and wooden planks, and set fire to a building. They also tore down the provincial governor’s portrait.

The protests have so far failed to pose a major threat to Bashir’s government, despite the closure of banks and the emergency curfew imposed in the capital, Khartoum, and other major cities since the protests started on Wednesday.

The security forces on Thursday also banned the domestic news agency, which provided a steady stream of information about the demonstrations. The Sudanese Professionals Association, a group that is calling for the creation of a “people’s committee” to demand the resignation of the president, also cancelled Saturday’s demonstrations because it feared violence.

The government blamed opposition leaders for inciting the protests and claimed they had financial backing from foreign countries. The president’s office released a statement on state television accusing Qatar of using terrorists to try to foment unrest in Sudan. Qatar denies any role in the protests.

The authorities have been flooded with messages calling for the demonstrations to continue.

On Friday, teachers and university professors held rallies in several cities outside Khartoum. They too demanded Bashir’s resignation.

Protesters have also spread their calls to cities outside Sudan’s capital, demanding the resignation of other government officials. In El Obeid, scores of angry students took to the streets in other cities, yelling slogans against the government.