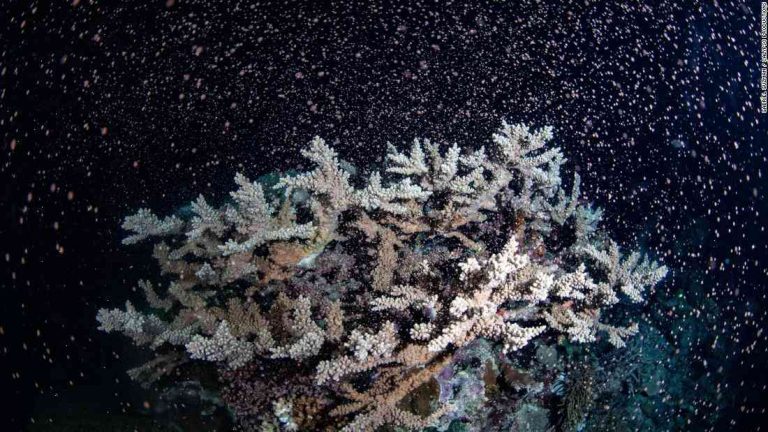 Scientists in Australia have created a new form of life by spawning an enormous reef fish.

The stone panfish was captured spawning over 30 metres (100ft) in the Great Barrier Reef, which stretches across 4,000km (2,500 miles) of Australia’s east coast.

Volunteers for the SmartFish Project looked out for the large sharks before the harbour fish came out of the water to spawn.

The production of the new fish was captured in detail by photographer Andrew Sledge and his team.

They managed to get footage of up to 35 species of panfish spawning in the reef using a special underwater camera.

The panfish, or freshwater snapper, is a common rockfish in Australia. They form the foundation of coral and oyster reefs as well as promoting coral growth, making up up 25% of the world’s reef fish.

“It’s beautiful to have a video of a fish spawning and watching it erupt from the water, especially as this is the first panfish egg and embryo to occur in this area,” said Andrew Sledge from Nature Conservancy in Australia.

“This is an extremely rare event, so the information collected from this will be very valuable in understanding the species and how best to protect them. We can’t predict whether this spawning behaviour will occur in the future, but hopefully we’ll be able to monitor it over time,” he added.

In total, 79,000 eggs and embryos were captured by Sledge and his team.

“Making that image was a really emotional moment for us, as the fish swimming through the huge boulders was like watching something out of a movie,” said Mr Sledge.

He and his team had been hoping to recover the live reproduction after the spawning and save the embryos for the next spawning cycle, but this did not take place.

The new videos have been released in partnership with the Great Barrier Reef Marine Park Authority and the Australian scientists hope the footage can be used to catalogue all of the living fish in the tropical region.

“I’d like to see this footage made accessible to researchers all over the world to try and track the population of pearl perch, rock perch and white perch, in particular, as we believe a good portion may be from the Great Barrier Reef,” said SISMO director of conservation Matthew Douglass, who organised the 2019 event.

Over the next decade the Great Barrier Reef Marine Park Authority and SISMO will undertake a population mapping effort to help build a snapshot of all the reef fish stock in the area.

“We will also collaborate with other regional authorities and researchers on this project including the Fishery Research and Conservation Authority and University of Queensland to track and save fish eggs, embryos and larvae from the reef,” Mr Douglass added.