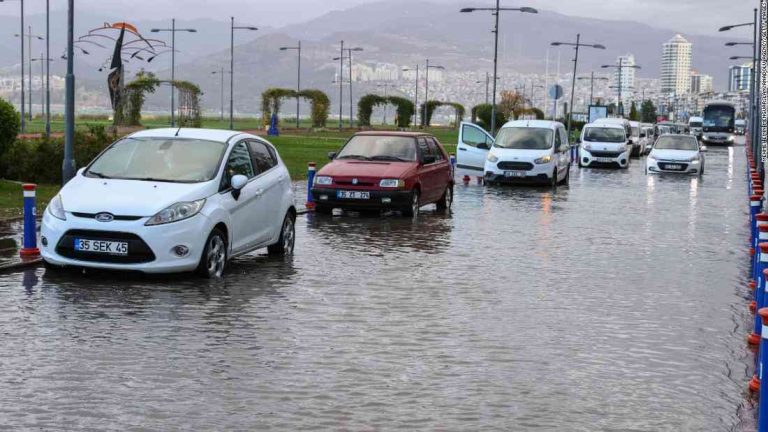 More than 20 people have been killed as severe winds lashed parts of Turkey and parts of the Black Sea region.

Two cars flipped over on the highway near Sivas, south-west of Istanbul, with 11 people inside, reports say.

Two boys are said to have died in a muddy cave after being swept away.

More than 50 people died in the province of Istanbul, while other deaths have been reported in cities including Izmir, Malatya and Adana.

Buses overturned, houses were blown over and streets were closed.

More than 400 people were injured in the worst-hit area, says the state-run Anadolu Agency.

Earlier this week, at least 87 people were killed in the province of Van in central Turkey when two separate strong earthquakes struck.

Parts of Ankara and Izmir in western Turkey suffered severe property damage in the storms, with buildings flattened by the high winds.

Some 590 people were injured in the Black Sea region alone.

The National Disaster and Emergency Management Authority (AFAD) has asked residents to stay away from urban areas, in an effort to limit damage.

Late on Monday night, wind speeds reached 100km (60 miles) per hour in the Black Sea region. Winds of 80km/h were measured in Istanbul on Monday.

Nearly 400 flights had to be cancelled in Adana, according to the country’s ANADOLu news agency.

Also on Monday night, heavy rain forced authorities to close the Bosphorus Bridge – one of the world’s largest suspension bridges – which links the European and Asian sides of Istanbul.

Powerful winds and heavy rain have also been recorded across much of the UK, but the meteorological office says there are no reports of damage or injury.

Turkey and the UK have a long history. Britain is believed to have sent two warship warships to defend the northwestern coast of the Aegean between 1834 and 1862.

President Recep Tayyip Erdogan is due to visit Greece next week for the EU-Turkey summit, and Turkey’s Foreign Minister Mevlut Cavusoglu is due to meet counterparts from Argentina and Cuba in Cuba.

Prime Minister Gordon Brown was in Ankara on Monday and criticised British and EU officials over their “complacency” in allowing Turkey to join the EU.

His comments came in response to Turkey’s surprise decision to delay its EU accession talks until 2020.

Mr Brown said he was “appalled” by the announcement, adding: “Their great-grandchildren will not forgive us.”

Image copyright Reuters Image caption There were also reports of damage to buildings in Izmir, the country’s fourth largest city

Image copyright Reuters Image caption Hailstones of up to 1.7in (4cm) were also reported in Izmir

Turkey has said its membership negotiations with the EU have been suspended for the time being – though hopes of Turkey joining the EU in the medium term still remain.

President Erdogan has accused the EU of “doing nothing” to help Turkey’s refugees.

After hosting European Commission President Jean-Claude Juncker in Ankara in June, Mr Erdogan lashed out at the EU, accusing it of “financial strangulation” and being an obstacle to Ankara joining the bloc.

Turkey is home to the biggest number of refugees living in Europe.

More than 3.5 million of them were displaced by the conflicts in Syria and Iraq. Most have been sheltering in Turkey for two years.

If you’ve seen the aftermath, how has it looked and what are the people of Turkey saying? Send us a picture.